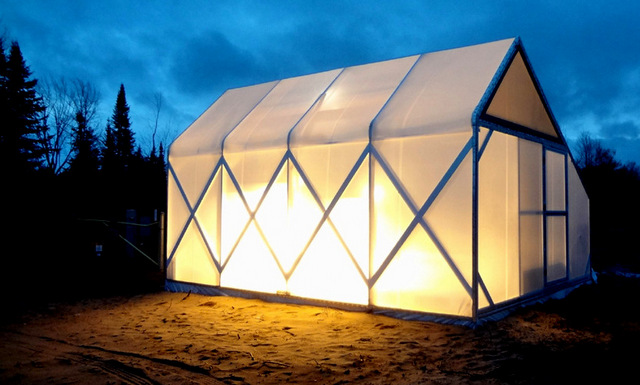 This is a 16 foot by 20 foot Yoopertopia “Cell.” It can be used as is or combined with Boomer Bloomers to make up what I call, “The Yoopertopia Growing System.” Together they introduce the concept of “Extreme Gardening.” One Cell allows for “neighborly gardening.” More Cells can be added to develop a semi commercial on up to a commercial growing operation. The Cells can be oriented in such manner as to develop a sawtooth pattern that forces prevailing winds into the vents so to diminish the need for large, expensive fans. Here is a daytime view. 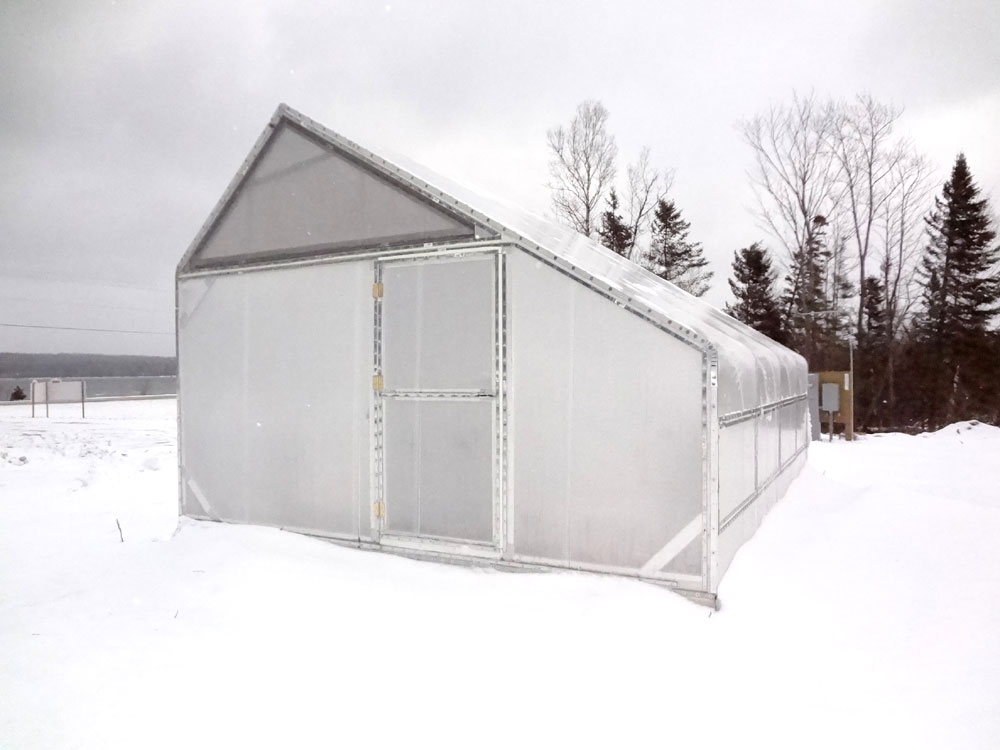 The Yoopertopia Greenhouse TM includes extra large triangular apex vents (10 feet wide, 4 feet tall) at the top on both ends, extra large doors (88” tall, 44” wide) on both ends, and fully-across-the-front vents (2 feet tall, 20 feet long). There is more ventilation capability than any other greenhouse of this type on the market, and it’s all made to be airtight when closed up. All of the ventilation areas are screened over to maintain a bug free environment including the sliding screen doors, another greenhouse innovation.

To make the skin so tight, I had to invent a special fabric tensioning device. The reason why such a simply made wood frame greenhouse can stand up to so much abuse is by using the coefficient of contraction of the cover material to tighten up the entire structure.  By the way, the snow got up to five feet deep on the south facing side several times in the past two winters. Five feet deep is the limit before having to remove it. 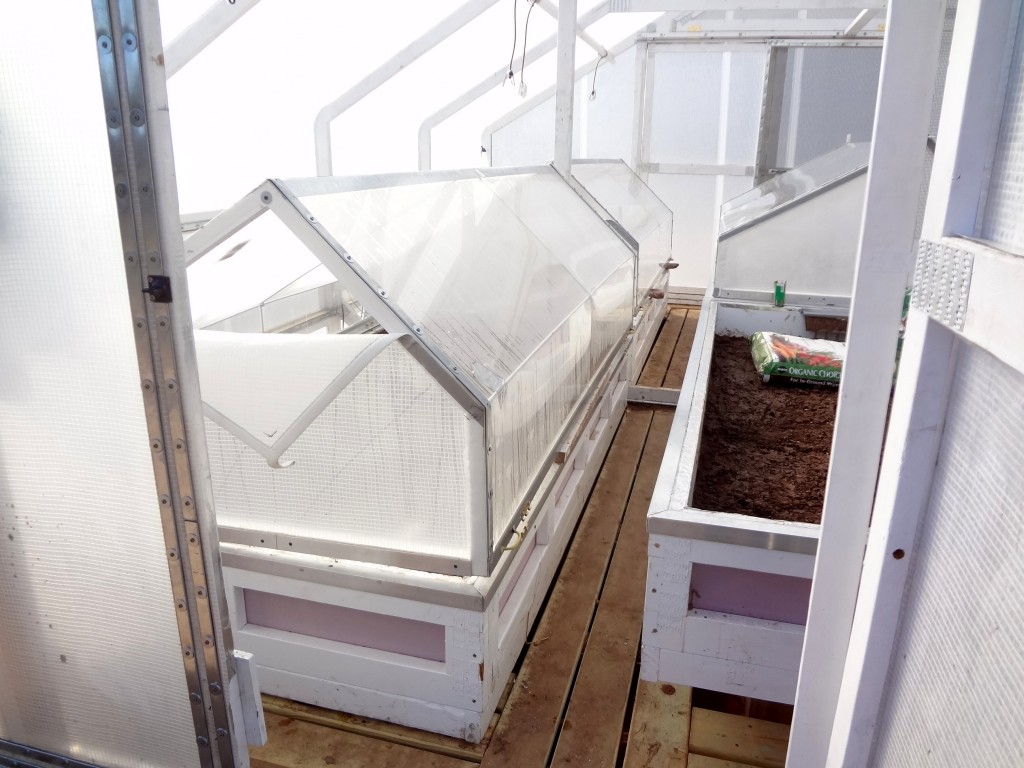 Each Boomer Bloomer provides an efficient 32 square feet of gardening space.  A recent new improvement to the canopy will allow growing at even lower temperatures. 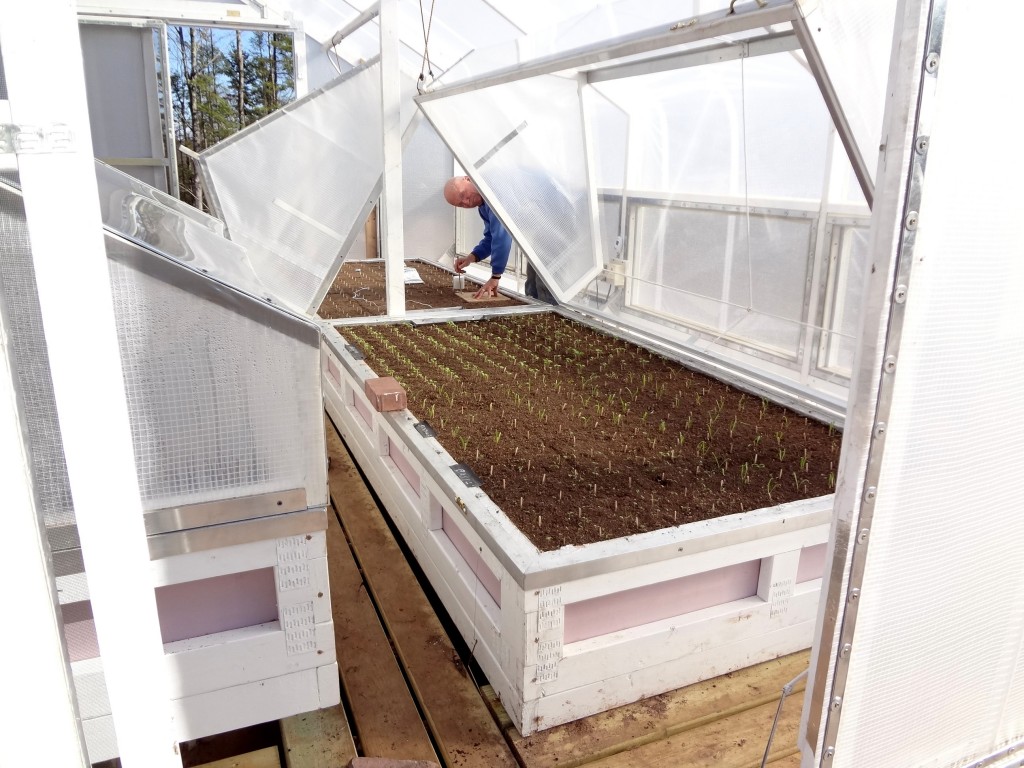 Using the seed planting template makes for more efficient use of space.

The person in the photo above is using a specialized seed planting template  that dramatically reduces weeding time by identifying the preferred plant from a weed very early on.  There is very little work that goes into gardening in a Boomer Bloomer. As a matter of fact, once set up, all aspects of gardening to include tilling, seeding, weeding, and harvesting, can be accomplished while enjoying a glass of wine.  I am not exaggerating. 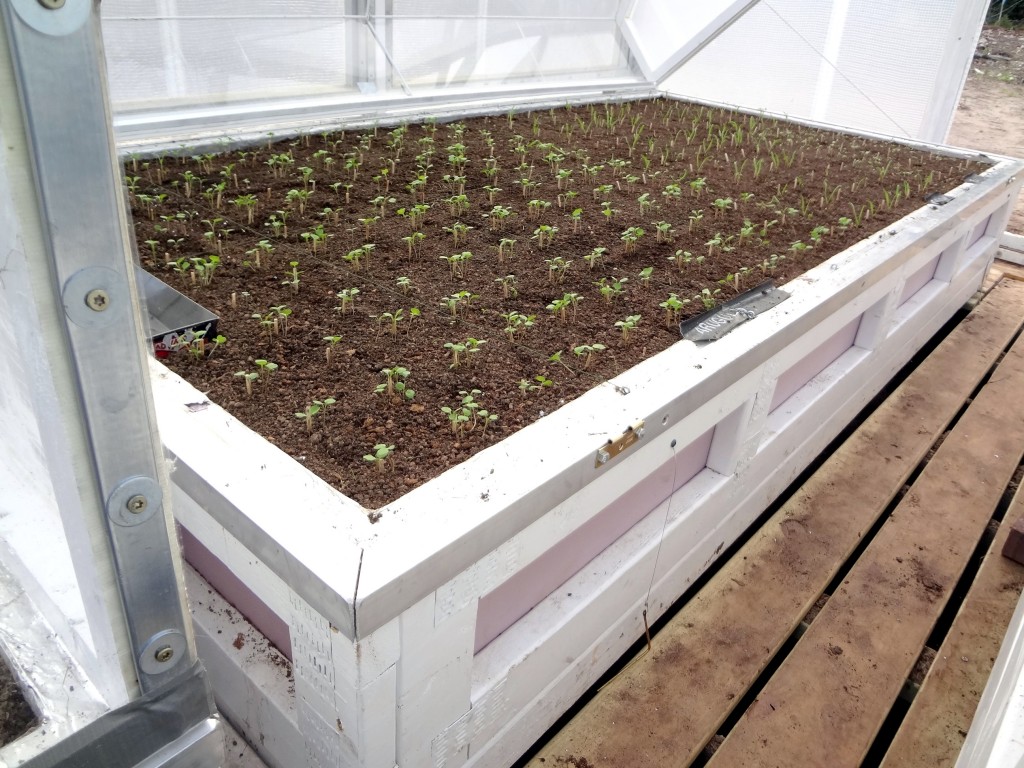 Planted from seed on Oct. 20th in the Upper Peninsula of MI. Growth after 10 days.

This is ten days after planting from seed.  Night time temps are already below freezing.  The system is designed for maximum yield by efficient use of space.  Here’s what the system looks like after five weeks, in early December. 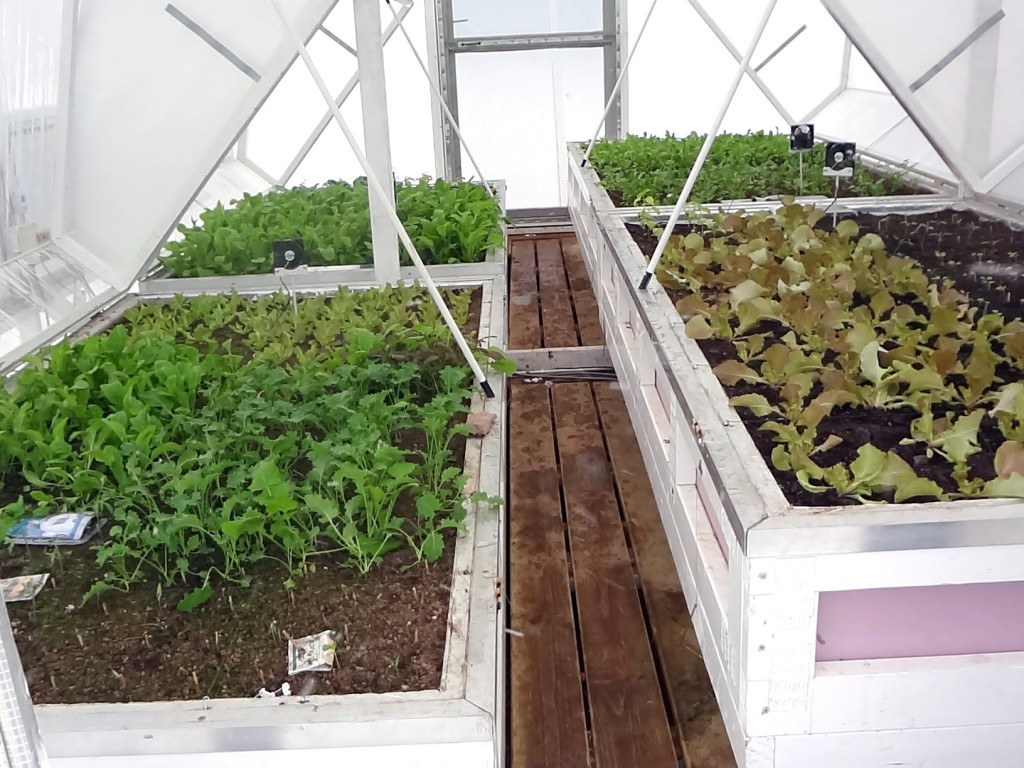 Even the watering system can be automated.  Everything is so easy.  The plants are robust even though it’s below freezing outside. 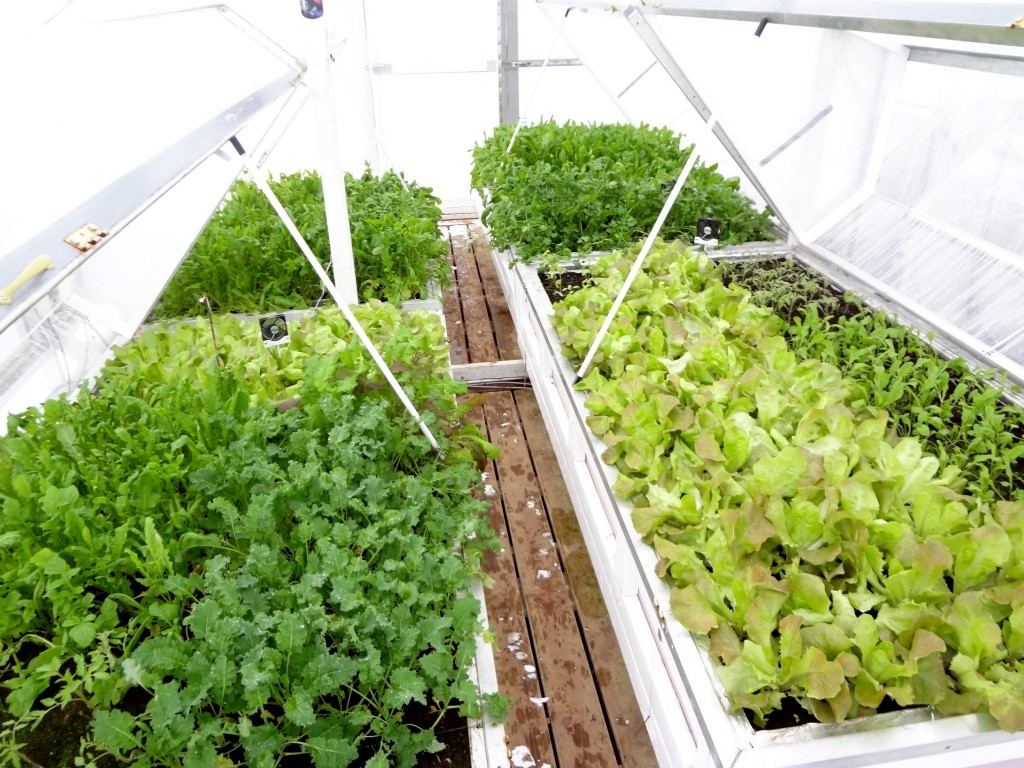 Video recorded on December 23rd in the Upper Peninsula of Michigan

Planted on October 20th, this photo was taken on December 23rd. Notice the snow tracks? The Boomer Bloomers (the boxes with canopies) are heated with soil heating cables. The cost to operate at full blast is about 2.5 cents per hour per Boomer Bloomer (400 watts per unit). This was harvested, sold locally, and replanted in the middle of winter. Here is how I explain to people how it all works.

Think of putting a large pot of water with a tight fitting lid on a stove and set the heat to as low as it can go. Obviously, it will take a long time to bring the water up to temp. Once up to heat though, it only takes the same low amount of energy to keep it heated. The Boomer Bloomer TM canopies are sealed around the perimeter so as to trap the heat. A Boomer Bloomer by itself, without the Yoopertopia Greenhouse shell, can grow a healthy garden down to a temperature of 22 degrees Fahrenheit based on my research. New improvements to the canopy will take it down even further, possibly down to 18 degrees. The residual heat that escapes through the skin of the canopies is all that is needed to keep the dead-air space inside the greenhouse warm enough for the Boomer Bloomers to grow. The outside ambient air temperature can be significantly lower.  Here’s another inside view. 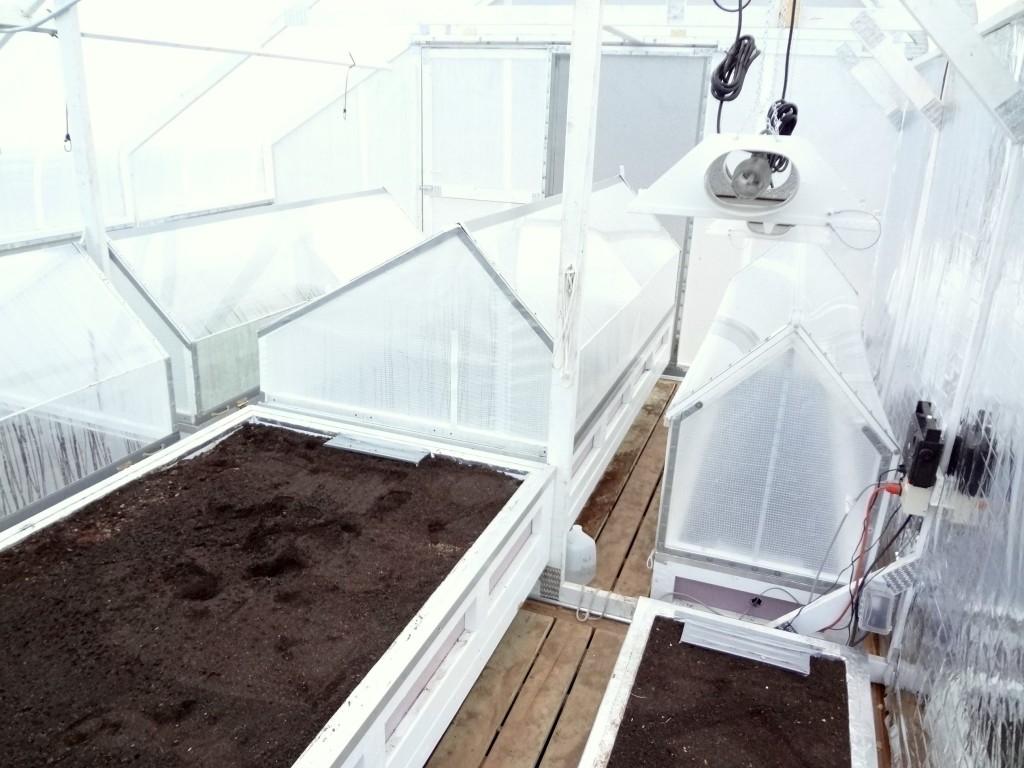 Looks like the inside of a surgical suite. Neat, clean, tidy, efficient. 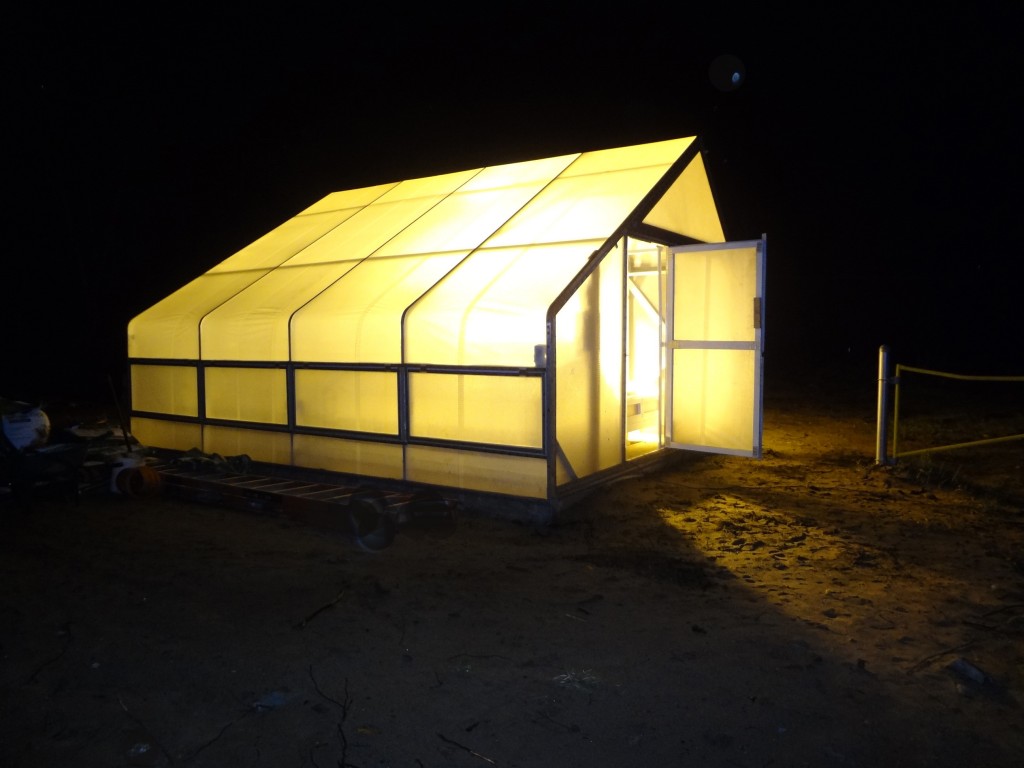 Clean, crisp lines and a tight cover are supremely important to handle conditions in the Upper Peninsula of Michigan.

All openings are screened over to provide an insect free environment.  Sliding screen doors are included.  The cover material around the entire perimeter extends several feet below ground to keep critters from burrowing inside, helps to anchor the greenhouse, and helps to maintain airtight integrity to prevent heat loss. 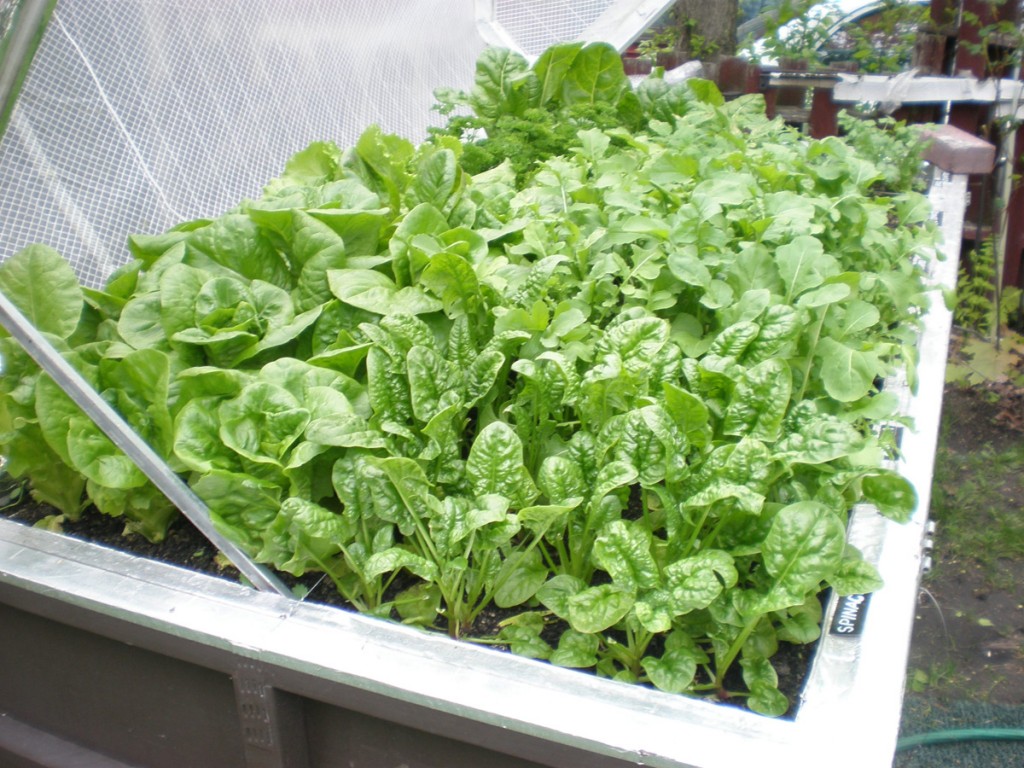 June 1st, 2011. The last frost day in the Upper Peninsula is June 12th. This garden is 3 months ahead of normal.

This is the first of two gardens for the season in the very first Boomer Bloomer prototype.  It was planted in early March in the Upper Peninsula of Michigan.  Photo taken June 1st.  This pint sized Boomer Bloomer is only 16 square feet.  Anyone can expect the same results as they have been exactly like this for the past four years.  I plant another garden in late August to harvest into December. 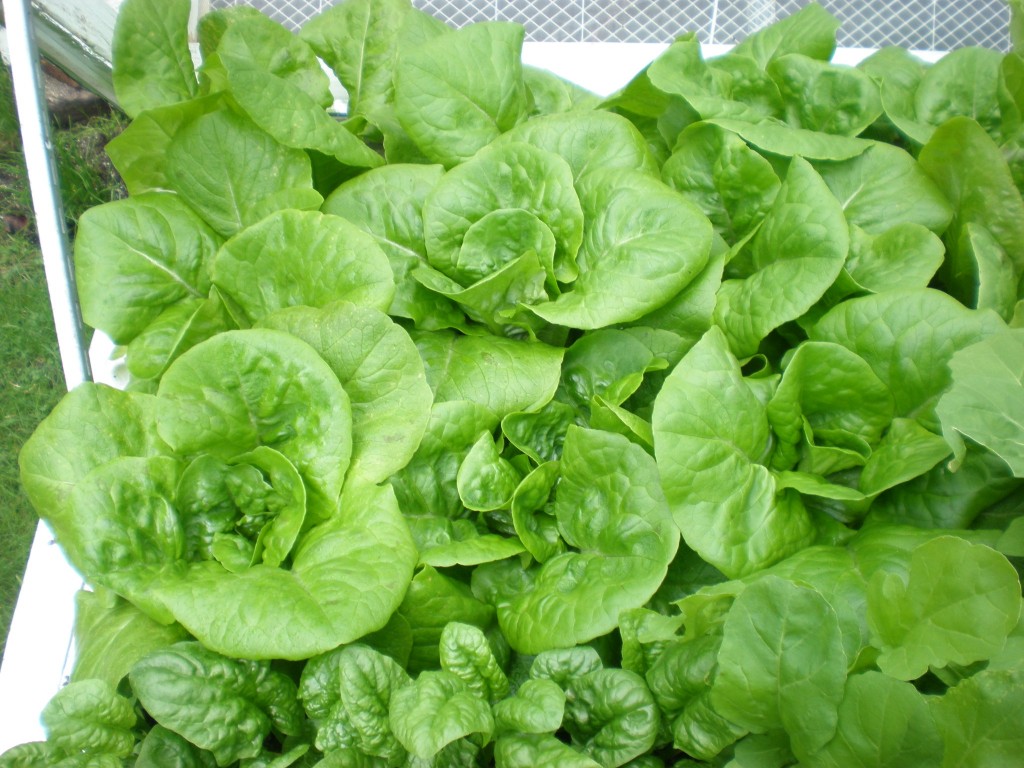 Using the Mel Bartholomew square foot gardening method, you can really pack a lot in a small space.  Every leaf is flawless.  There is no concern over snow, frost, hail, wind, or bugs.

Since truss manufacturers are evenly spread throughout the United States, the factories already exist everywhere. The truss manufactures do the framing which is about 70% of the work involved.   What I plan to do is create self employment by teaching small groups of like-minded people how to make the rest of the component parts in their homes.  I call it “The H.O.M.E. SystemTM.”  H.O.M.E. is an acronym that stands for Home Operated Manufacturing Enterprise. It’s green all the way. More about the H.O.M.E. System in another blog.  Stay tuned! 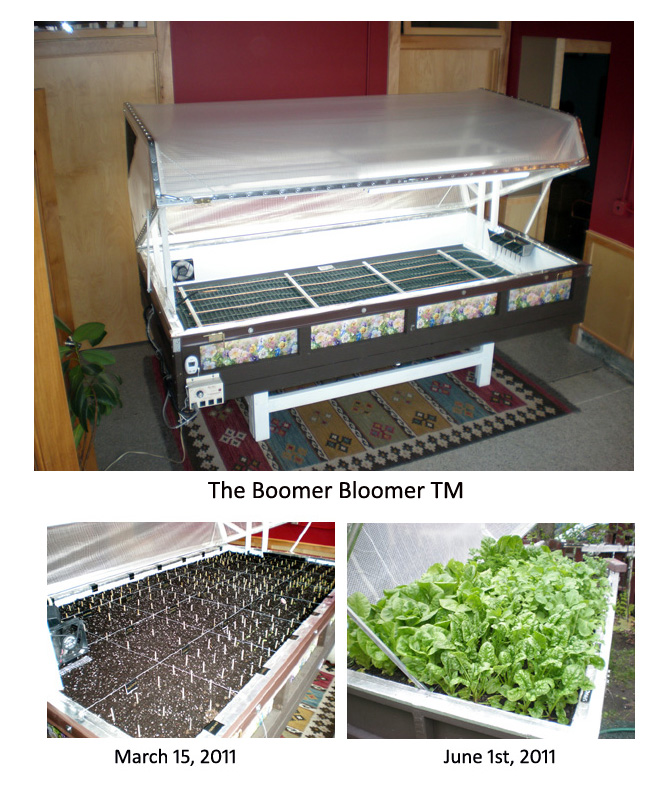 Make Your Own Living Tree Art

Sign up for one of my classes and learn how to make your own Living Tree Art.